The members of one of the Club's more relaxed sections, the Bridge Section, can be found battling it out on the lawns, under the trees, and even occasionally in the bridge room. 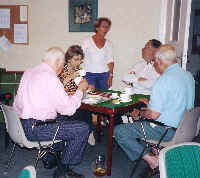 The “bridgers” were given a room of their own when the clubhouse extension was officially opened by the Queen in 1972. 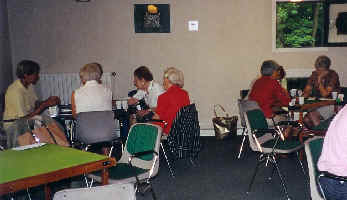 Tournaments, preceded by dinner, are held monthly, from October to June, for members and guests. Rubber bridge is very popular with players who wish to get together for a friendly game, at the weekend or during the week. The Section presently fields two teams which take part in an Interclub competition organised by the Hurepoix Committee of the French Bridge Federation (FFB) with matches at home and away.

Lessons and supervised games can be organised according to demand; monthly workshops are held for those players looking to progress. The morning lesson, either on a specific theme or using prepared hands, is followed by lunch and a friendly tournament or match which finishes around tea-time.

While face-to face tournaments and games are being discouraged, why not try your hand at these online bridge sites?

As there were only 4 tables, the "Howell" movement was used, meaning that every pair changed places and opponents at each round. Warm congratulations to the winners - Murielle and Anne - with 55.56%, and also to Nicole and Jean-Paul - close seconds - with 55.09%, not forgetting the thirds  -  Maureen and Ann - with 54.81%.
Full results are attached to the main article, as are some worked examples from the quiz.